Coyotes are versatile, intelligent and adaptable to most habitats. Ironically, the qualities that have enabled the coyote to survive 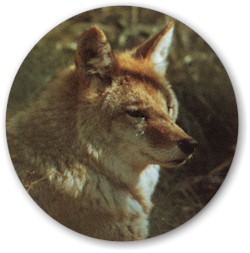 have now made it one of the most persecuted animals in the United States. However, the coyote's bad rap is undeserved. They actually play an important role in the ecosystem and do not pose a serious risk to humans.

Keeping Coyotes at a Distance

Coyotes are drawn to urban and suburban neighborhoods for two reasons: human encroachment into native habitat and the availability of food. Take the following steps to prevent coyotes from being attracted to your home:

Cats and small dogs may be seen as prey to the coyote, while larger dogs could be injured in a confrontation. To avoid these situations consider the following:

Trapping and relocation of coyotes is not recommended except as a last resort. Disruption of family packs can cause orphaned juveniles to seek easy prey, such as small dogs and cats, and other coyotes may move into the vacated area.

Coyotes are usually wary of humans and will avoid people whenever possible. Aggressive behavior toward people is not normal and is most often a result of habituation due to feeding by humans. If you encounter a coyote, remember the following:

Coyotes are not considered a disease threat. Outbreaks of rabies in coyotes are rare and not commonly implicated in the transmission of the disease to humans or companion animals.

More information about humanely co-existing with our wild neighbors can be obtained by browsing our other expert articles. Visit our "Animal House" display at our shelter for more ideas about "animal proofing" your home and yard.

Modified and reprinted with permission of the Animal Protection Institute

Please help us kick off the season of giving with a gift to Hope's Lights. You can purchase a light in honor or memory of a beloved companion animal, person, or even a wild animal. Every gift helps animals in need.