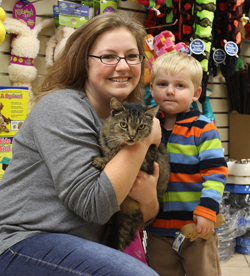 Racine, WI – Lindsay O’Neill was shocked when she got the call on Tuesday that her cat, Sammie, had turned up at the Wisconsin Humane Society Racine Campus. Sammie had been lost five years ago.

For the past several months, a local resident had seen the 8-year-old tabby cat hanging out around her home. The finder began to worry when the weather started to turn cold, so she brought Sammie into the Wisconsin Humane Society (WHS) Racine Campus, where he was scanned for a microchip.

Unlike most strays, Sammie had a microchip, which was registered to O’Neill. Shelter officials called her, and the two were reunited Tuesday afternoon.

Alison Kleibor, director of the WHS Racine Campus, wants the public to take notice of the importance of microchips. “Microchips make reunions like this possible. They are inexpensive and very effective,” Kleibor said. “Every area shelter scans stray animals, and every animal is at risk for becoming lost, no matter how careful you are.”

The Wisconsin Humane Society offers microchip implantation for just $25 at their vaccine clinics. The chip is about the size of a grain of rice, and is implanted between the animal’s shoulder blades.

Double your impact for animals today! All donations are being matched dollar-for-dollar, making twice the difference for animals in need.