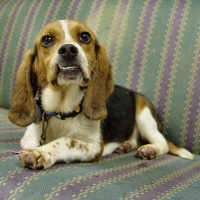 Puppy mills are breeding facilities that produce puppies without concern for their physical, social or emotional needs. The puppies are sold to the public via the internet or newspaper ads, or to brokers and pet shops across the country. Unsuspecting consumers often obtain puppy mill puppies facing an array of immediate veterinary problems, or harboring genetic diseases that do not appear until years later. Such medical problems can be a financial hardship on the dog's family.

Animals originally from puppy mills and other unscrupulous breeders are sometimes surrendered to the Wisconsin Humane Society because they are sick or have serious behavior problems.

Many dogs from puppy mills are inbred or overbred, and receive minimal veterinary care, poor quality food and water, and very little socialization. Sadly, some dogs are forced to live in puppy mills for their entire lives. Female dogs are sometimes killed or sold once their reproductive years are over.

Most pet stores obtain their dogs from puppy mills. There is one way to end that cycle: don't support businesses that sell animals, and don't obtain animals from these sources.

In an unprecedented move, the Wisconsin Humane Society bought and shut down the state's largest breeding facility, Puppy Haven Kennel, in 2008. WHS worked to find homes for more than 1,600 dogs from Puppy Haven. These dogs had never had their own beds, toys, or even names. Most were terrified of people and cowered when someone approached. WHS staff worked to rehabilitate the dogs and provided adopters with information about the special social and physical needs of puppy mill dogs. 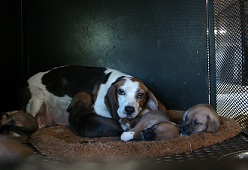 On December 1, 2009, Governor Doyle signed Wisconsin Act 90 into law. This important piece of legislation will establish a much-needed licensing and inspection program to end the suffering of thousands of dogs at the hands of unscrupulous dog breeders.

This legislation ensures that breeders provide minimum standards of care for dogs and levels the playing field for reputable breeders who already provide for their dogs. Click here for information about selecting a reputable breeder.

This legislation also regulates animal care at shelters. The Wisconsin Humane Society provides care and treatment above and beyond the standards set forth in the legislation. WHS will continue to comply with such legislation and subsequent rules, and we are happy to be included because we know that regulation will ultimately result in better care for animals everywhere.