Your new bunny will not bark or meow, but she will be able to communicate her moods and intentions quite clearly. 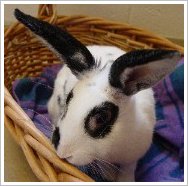 Communication between two species takes time and patience as both parties learn to speak a new language.

May indicate an aggressive mood usually provoked by an assumed attack. It may also be followed by a lunge, scratch or bite so it's important to pay attention when you hear this sound.

Most rabbits use this when they want to be put down and allowed to run free.

Indicates a willingness on the part of the buck to court and mate.

Occurs when the rabbit is very frightened or very excited. In the world of rabbits, thumping is used in burrows to announce danger to the other rabbits.

Tense Body and an Upright Tail

The rabbit is ready to defend herself.

Rubbing with underside of chin and all kinds of objects

Indicates that these things are part of his territory. Both male and female rabbits mark their territory this way.

Rolling Over on His/Her Side or Back

A sign of pure delight and total comfort with his surroundings.

Please help us kick off the season of giving with a gift to Hope's Lights. You can purchase a light in honor or memory of a beloved companion animal, person, or even a wild animal. Every gift helps animals in need.