Peabody is a male White-throated Sparrow. 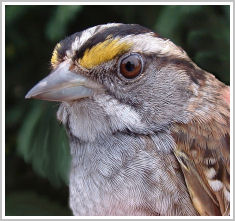 He is also one of tens of thousands of migratory birds who pass through Milwaukee twice each year as they migrate north in the spring and south in the fall.

Peabody had the great misfortune of colliding with a lighted tall building while he migrated north through the city this past spring. The collision fractured bones in his left wing and Peabody certainly would have died if Bill hadn't helped.

He found Peabody during his monitoring and gently captured him and brought him to the Wisconsin Humane Society’s Wildlife Rehabilitation Center at 45th and Wisconsin. The Center’s skilled staff splinted Peabody’s broken wing. For three weeks the Center’s dedicated volunteers cared for him in the WHS wildlife hospital as his body mended. Much to everyone’s delight, Peabody was released to go back on his way northward toward his species' breeding grounds.

Sadly, not every window collision victim is as fortunate as Peabody.

Estimates place the number of native birds killed in window collisions across North America at between 100 million and one billion birds each year!

You can help birds like Peabody fly safely through Milwaukee by joining WIngs!