Why do cats scratch?

It’s normal and healthy for cats to scratch objects in their environment for many reasons: 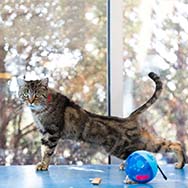 Scratching is a normal behavior and one that cats are highly motivated to display. It’s unrealistic to try to prevent them from scratching. Instead, the goal in resolving scratching problems is to redirect the scratching onto acceptable objects.

The answers to the following questions will help you understand your cat's scratching preferences:

Should I correct my cat for scratching?

Correction is effective only if you catch your cat in the act of scratching unacceptable objects and have provided her with acceptable scratching objects. Correction after the fact won’t change the behavior, but may cause her to be afraid of you or the environment and may elicit defensive aggression. Used by itself, correction won’t resolve scratching problems because it doesn’t teach your cat where to scratch instead. If you catch her in the act of scratching inappropriate objects, remote correction is best. You do not directly interact with her with this type of correction. Ideas for remote correction include making a loud noise with a whistle, slapping the wall, or spraying with a water-filled squirt bottle not directed at her face. If correction is interactive, she’ll learn to refrain from scratching in your presence, but will continue to scratch when you’re not around.

How do I trim my cat's claws? 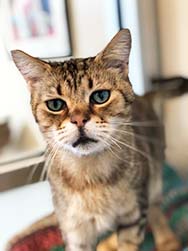 To help keep them sharp, cats keep their claws retracted except when they’re needed. As the claws grow too long and become curved, they can’t be retracted completely. You should clip off the sharp tips of your cat’s claws on all four paws every week or so. Clipping your cat’s claws will also help prevent them from becoming snagged in carpets, fabrics and skin.

Before trimming your cat's claws, accustom her to having her paws handled and squeezed. You can do this by gently petting her legs and paws while giving her a treat. This will help to make it a more pleasant experience. Gradually increase the pressure so that petting becomes gentle squeezing, as you’ll need to do this to extend the claw. Continue with the treats until your cat tolerates this kind of touching and restraint. It may take a little longer if she’s not used to having her legs or paws handled.

Apply a small amount of pressure to her paw, with your thumb on top of her paw and your index finger underneath, until a claw is extended. You should be able to see the pink or “quick," which is a small blood vessel. Don’t cut into this pink portion, as it will bleed and be painful for your cat. If you cut off just the sharp tip of the claw, the “hook,” it will dull the claw and prevent extensive damage to household objects and to your skin. There are several types of claw trimmers designed especially for animals. These are better than your own nail clipper because they won’t crush the claw. Until you and your cat have become accustomed to the routine, one paw a day is enough of a challenge. Don’t push to do all four at once or you’ll both have only negative memories of claw clippers!

Should I declaw my cat?

We discourage people from having their cats declawed. 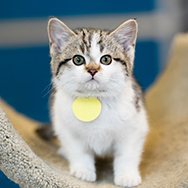 items, such as a cat scratching post. Without the ability to claw, your cat may develop behavior problems that you have not previously experienced. Destructive scratching problems are correctable with a little patience and commitment. The Wisconsin Humane Society can help.

The Wisconsin Humane Society offers Cat Behavior Seminars on a monthly basis. Please visit our calendar of classes for the seminar schedule.

If you would like to work with a Wisconsin Humane Society behaviorist one-on-one regarding this behavior topic, please call 414-431-6173 to schedule a consultation or email us at behavior@wihumane.org.

WHS and the COVID-19 Impact

Learn about the COVID-19 response at WHS and how you can help! 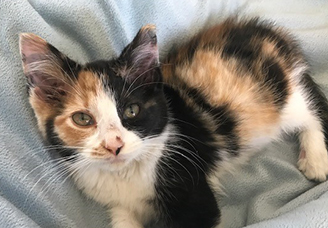