Research finds a clear and compelling link between animal abuse and other violent acts. Animal abuse does not only hurt animals; it affects our entire community.

Animal abuse has a strong connection to domestic violence. Victim’s dogs and cats are often used by abusers as pawns to manipulate and control them. In an abusive home, a companion animal may serve as a lone confidant for an abused woman or child and, by abusing the animal, an abuser takes advantage of the victim’s concern for his or her animal. Abusers may threaten or abuse animals in front of children and partners to keep them from reporting abuse or leaving. By hurting the animals, an abuser is sending the message that a human victim could be next.

The effect on children

Children who witness such abuse are three times more likely to abuse animals and to play a role in an abusive relationship later in life. 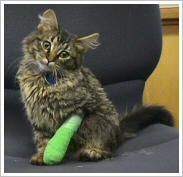 When an animal is abused, a chain reaction begins in our community. Not only does an innocent animal get injured, but the person who commits the offense often falls into a cycle that could ultimately result in violence against other people. The evidence of a link between cruelty to animals and violence toward humans is compelling. In fact, people who abuse animals are five times more likely to commit violent crime.

Animal abuse, like many other forms of abuse, is about power and control over a helpless victim. By taking action against animal cruelty, we protect animals and may uncover and perhaps prevent additional crimes.

Many victims are hesitant to leave a dangerous situation because they fear for their animal’s safety.

That's why the Wisconsin Humane Society created the Safe Haven program in partnership with Sojourner Family Peace Center. Safe Haven provides up to 60 days of temporary shelter to animals from families affected by domestic violence, allowing families to leave an abusive situation while knowing their animal is safe and cared for. To learn more about our Safe Haven program, click here.